A small-but-growing cohort of consumers is experimenting with an unconventional diet – one that doesn’t have anything to do with losing weight, but rather, saving the planet.

Enter the climatarian diet, which can vary in method and the particular foods that are considered off-limits, but generally involve greatly reducing a person’s intake of emissions-producing or resource-intensive foods. For many of these consumers, that includes reducing animal protein, particularly beef, but also sheep/ lamb, pork, and farmed fish.

Poultry and dairy are often considered less resource intensive to produce, but often still require more resources than plant-based foods like wheat, rice, corn, beans, and roots/tubers. That leads many consumers who consider themselves climatarians to choose a vegetarian or vegan diet — and many then also exclude produce like avocados, soybeans, and almonds, which are often considered resource intensive.

While only a small fraction of consumers are currently practicing a climatarian diet, a majority think this way of eating can help the planet, so operators and food brands of all types should consider finding ways to offer more sustainable fare for this growing sect of conscious consumers.

Local is in - and shrink wrap is out

The climatarian diet puts a heavy emphasis on local fruits and vegetables, while crowding out those that have to travel long distances to reach supermarket shelves or are not in season, as well as choosing organic when possible. And it’s not just food that climatarians put careful limits on. Those that follow the diet also avoid products with excessive packaging. This is not only a problem in the produce department (have you seen pictures of those single bananas or six-packs of apples in sturdy-but-not-reusable plastic packaging?) but also with takeout, which most consumers got more of during the pandemic.

The term “climatarian,” — which first appeared in The New York Times in 2015, and entered the Cambridge Dictionary the following year — has gotten more attention in recent years as Americans have begun to take a more holistic approach to dieting, favoring foods less for basic nutritional content and more for how they make them feel.

Many of today’s consumers eat to prevent disease or improve different facets of physical health, or make choices to support their mental health by selecting foods that make them feel good about what they eat, both for themselves and for the planet. Nearly two in three consumers (57%) believe that switching to a climatarian lifestyle can improve their environmental impact, according to the Climatarian Eating HotShot report. And nearly one-third of Americans rank climate change as one of the top three socio-economic issues they care most about, according to Five in Focus: Climate Change & Sustainability.

And while most consumers view sustainability as their personal responsibility, many also think restaurants and the government should do more to help. In our New Food Values Keynote Report, 30% of consumers surveyed said they believe food brands and restaurants should take a stand and have a public position on climate change, but only 13% of operators said they had done so at the time (that’s changing fast though: 21% of operators said they planned to take a stand in the next 2 years).

According to our New Foundations in Health Keynote Report, 10% of consumers practice a climatarian diet. And even though it’s still relatively new (climatarian is the Inception stage of the MAC), it’s the diet that has garnered the most interest among consumers: in fact, 22% said they were interested in practicing a climatarian diet.

Climatarian focus at restaurants and retail

Some brands have taken action to reduce climate impact or show how consumers can make climate-smart choices in recent years, from Just Salad (which measures and labels the carbon footprint of every menu item) to Burger King (which has tested a Reduced Methane Emissions Whopper at select U.S. locations). And those efforts may translate into far more than just good public relations. 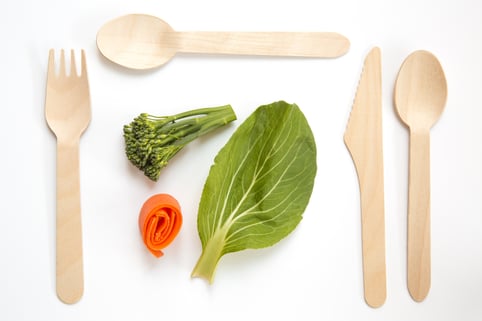 The World Resources Institute said in a study earlier this year that particularly worded environmental messaging on menus can double the likelihood that people will order low-carbon, plant based items. The two messages with the most impact, according to the study conducted using an online ordering scenario, were less numbers-focused and more encouraging. “Small changes, big impact” and “joining a movement” roughly doubled the percentage of vegetarian dishes that participants ordered in a simulated online order.

The personal perks of thinking global

Environmentally conscious consumers have shown they’re willing to pay more for foods that align with their values. And while the adoption of a climatarian diet isn’t focused on personal health, the tenets of the diet do tend to benefit individuals.

By focusing on whole, plant-based foods, consumers may be able to reduce their risk of a host of health problems including heart disease and high blood pressure, according to dietitians. And there is evidence the shorter a fruit or vegetable travels before it’s consumed, the more nutrient-dense it can be.

For businesses, the rewards for being more sustainable can be immense, but it's critical to communicate those efforts and menu adaptations to customers, because they're likely to reward you for it.

This article is an excerpt from the May 2022 issue of Trend Watch, available here in ReportPro, Datassential's vast food and beverage report library. If you're not a subscriber and would like access to this issue and the rest of Datassential's latest data and publications, including the ones mentioned in this article, reach out to us here.