NEARLY HALF of the limited-time offers (LTOs) that consumers tested in Datassential’s SCORES platform in December included a doughnut variety — and all led the field in Value rating. In particular, consumers ranked ampm’s Churro Donut in the 97th percentile for Value and the 98th percentile for Branded Purchase Intent.

It’s not enough for shoppers just to see value and purchase intent, though. Today’s crowded marketplace rewards items that stand out with high Uniqueness ratings as well. The ampm Churro Donut is a triple threat, scoring in the 95th percentile in that category, too. Datassential predicts that global and ethnic flavors will continue to drive shopper interest — and traffic — in 2019. The churro is a great way to use safe experimentation to reach variety-hungry consumers.

As you look for offerings that appeal to a wide spectrum of consumers across generations, genders and ethnicities, doughnuts are a mainstay in the all-important breakfast daypart. And, while the Churro Donut wins with everyone, that doesn’t mean you can’t also find success with another unique flavor. 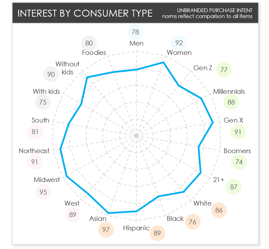